Miranda Kuo Gallery is pleased to present its inaugural show Continental Drift, an exhibition of sculptural works by UK-based artist, Kate Matthews. This will be the artist’s first solo exhibition with the gallery, featuring 5 original pieces. The works will be on view from Oct 2nd, 2016.

Kate Matthew’s multi-disciplinary works combine elements of op-art and minimalism with sculpture and painting; breaking down the barriers of two-dimensionality and abstraction through obscuring traditional rules of composition and form.

The artist’s pseudo–sculptural pieces play on the mind’s perception of color and depth on a three-dimensional surface.  As one approaches the work, one is immediately drawn to an area that extends beyond the traditional spatial boundaries of a standard painting, reminiscent of minimalist Dan Flavin’s light works.  Matthew’s works exist on a plane of their own, combining the three-dimensional physicality of an object with a painted optical effect – fusing the mediums of painting and sculpture, which were once distinctly separated into one cohesive body of work, creating an innovative context for contemporary painting.

Kate Matthews earned her MA and First-Class Honors Degree in Art: Theory and Practice from Lancaster University in 2001.  Her work has been included in the Celeste Painting Prize and she was named one of the top ten emerging artists in the UK by the Prospects Art Prize.  She has exhibited throughout the UK, including the Liverpool Biennial, as well as participated in numerous art residences around Europe.

The exhibition runs until October 30th. 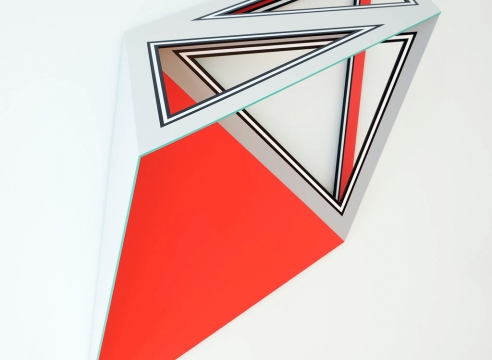