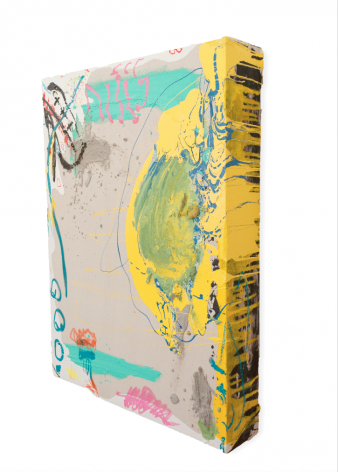 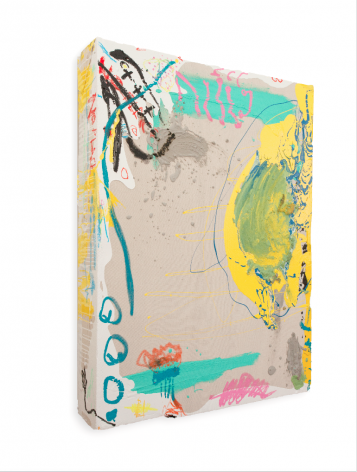 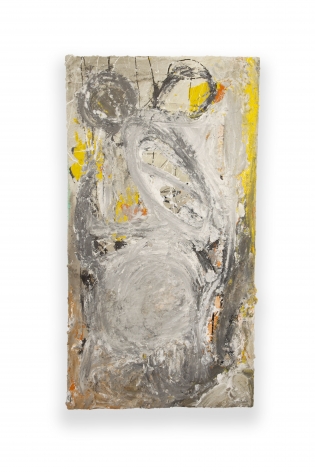 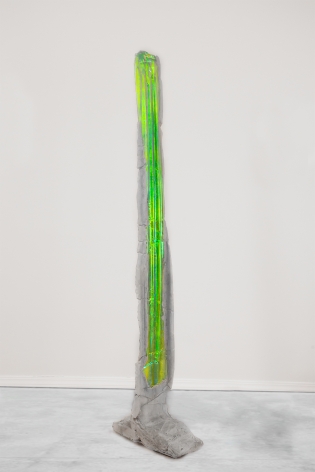 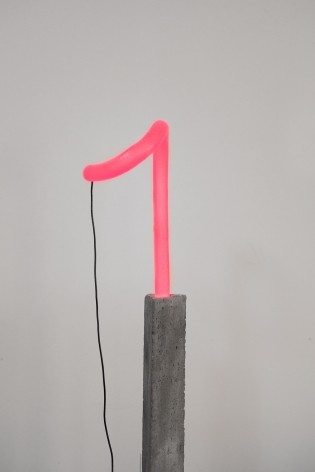 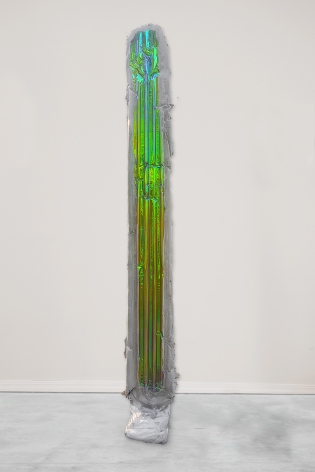 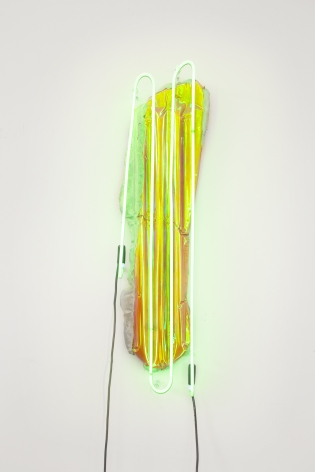 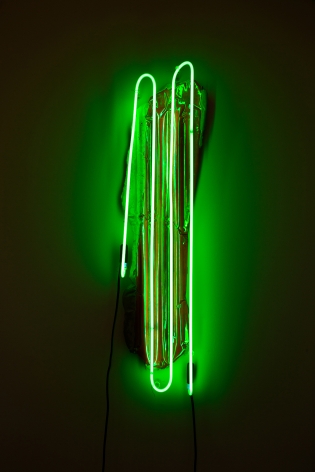 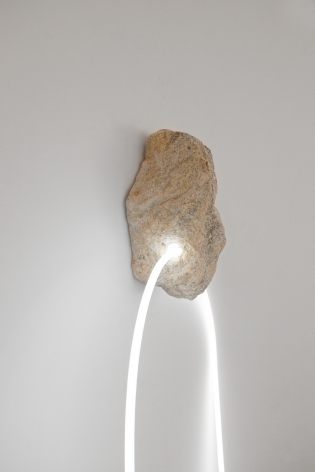 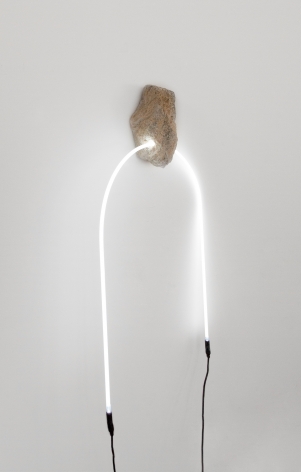 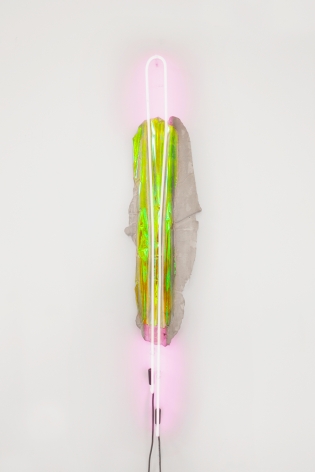 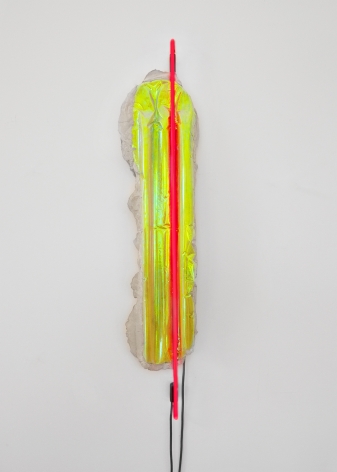 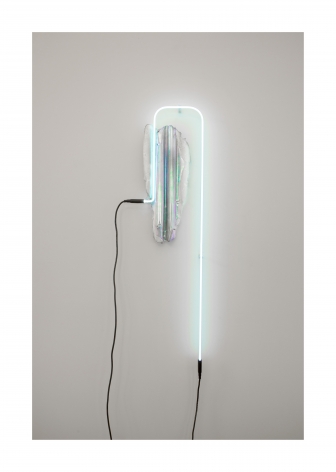 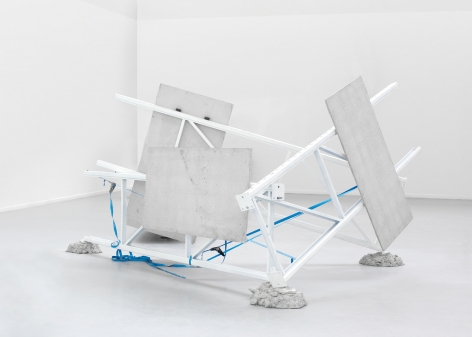 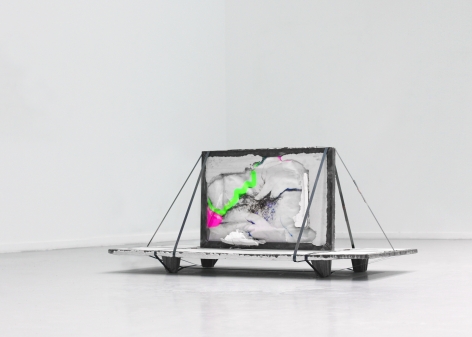 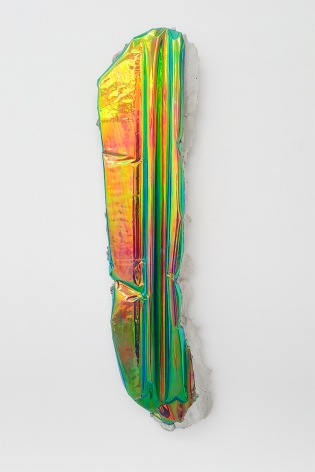 Much of the work made for this exhibition has evolved through a direct engagement with an archive. The archive in question is in fact the contents of a hotel, but not just any regular hotel, this hotel, that is also an archive, is filled with a large number of collections that comprise shiny and mysterious objects shipped in from different parts of the world. At the core of the hotel archive is a collection of crystals and it is here that we get a glimpse of the stones that persist throughout the work in the show. The hotel archive, as it has come to be known, is a starting point but also a point of return.

The Crystals of Bling Brutalism

When Thomas Hirschhorn writes that the crystals stand for ‘the universal, the ultimate and the absolute’ he is arguing that the crystals stand for beauty itself. Here, in the work of Philipp Eyrich and Mateusz von Motz we are confronted by an idea of crystals that can best be described as a bling brutalism. Lumps of concrete are covered with shiny reflective film. The raw surface of the concrete - that reveals itself on the edges and sides of the stones - is animated by the shiny colored film that clings to the surface. The stones shimmer in response to the passing movement of the audience, they dance to any changes in light and with this dance encourage the objects around them to become animated.

As with much of the work in the show, there is a collapsing of values. Crystal embody the lure associated with fools gold, these glistening reflective stones have come to be souvenirs that adorn the shelves of older relatives, they occupy domestic spaces but lack any function apart from the value associated with the gift. The combination of concrete and brightly colored reflective film comes into being as a encounter with a singularity of that which is at once precious and valueless. Donald Judd in his essay ‘Specific Objects’ (1964) argues that painting with oils had reached its limit. The colors and forms found in machine made objects, such as the shiny Harley-Davidson metallic green day glo or putrid Perspex oranges that proliferate throughout Judd’s work, offered new possibilities for art. This combination of raw fabricated metals and shiny glimmering surfaces gives form to an art that is situated within architectural space. Here, in this exhibition, we encounter the collapsing of painting and sculpture. The objects in the show are a series of co-existences, they are the crystals of bling brutalism.

Plotting and Mapping the Hamptons

Processing and orienting the landscape through dreams is key to understanding the inherent logic of the work in the exhibition. The parallel universe of waking and sleeping is drawn out through encounters with fragments of the landscape captured in photographs while walking in the Hamptons. But these images are not specific, familiar or even recognizable scenes from the Hamptons. They are instead de-familiarized and made strange. The photographic images embody a universalism, a dreamscape that speaks of the disjointed narratives and jump cuts that determine thought processes and interpretation.

In his writing on New Jersey Robert Smithson records the undifferentiated flows from geological handbooks, juke boxes, newspapers and advertisements. The New Jersey landscape becomes an ordered set of reflective ready-mades. These notations act as free-floating noise that disrupts the ‘crystalline vision’. In this work Smithson acknowledges a world at odds with a universal vision.

Some of the best art of our time has been produced by collaborative duos. Eyrich von Motz have together made a new body of work but this collaborative partnership is built on opposing world views. Where von Motz has grown up surrounded by ideas informed by anthroposophy, spiritual science and reincarnation, Eyrich, on the other hand, has been raised as an atheist and while his grandfather practiced as an evangelical priest, he remains resolutely tied to understanding the world through rational thought and logical reasoning. The work itself embodies these conflicting positions and as a result exists somewhere between the real and the magical, between scientific rules and absurdist fictions. Collaborative partnerships are by no means about agreement; the very best dialogues are those that accommodate difference or even antagonism. The work in the exhibition is restless and questioning. It does not set out to find answers but instead invents internal dialogues and co-existences that force an ongoing and unending questioning of the world.